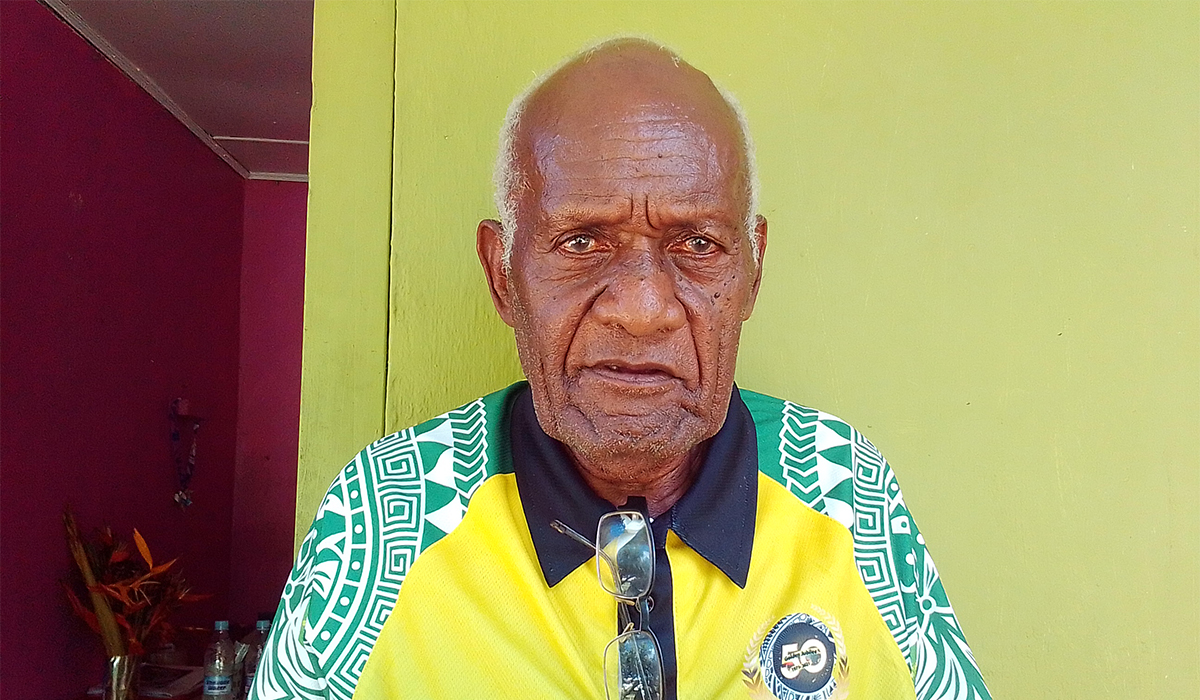 In the months leading up to Vanuatu gaining its Independence in July 1980, a fierce anti-Independence rebellion, dubbed the ‘Coconut War’, was taking place in the country’s north on the island of Espiritu Santo.

The island of Santo was under the control of anti-Independence rebels of the Nagriamel Movement and Independence supporters there were cut off from the Independence leaders based in the south in Port Vila.

Independence leader, Father Walter Lini, was leading the National Party which is now the Vanuaaku Party, and was about to become Vanuatu’s founding Prime Minister.

Now 41 years later, 76-year-old, Viran Vae Dan, who was a Santo-based radio communications officer at that critical time, says in May 1980 in the lead up to Independence, critical communications between Walter Lini and Independence supporters in Santo hung by a thread.

On Santo, Nagriamel leader, Jimmy Stevens, was leading an uprising against colonial officials and plans for Independence and his rebels were patrolling the streets of Luganville Town day and night, armed with spears, bows, arrows and stones.

Mr Dan says the rebels were breaking into shops and looting goods and were constantly monitoring all information being passed through radio telecommunications.

The rebels blockaded Santo’s Pekoa airport, destroyed two bridges, and declared Santo as the independent ‘State of Vemerana’ in May 1980.

The Nagriamel movement was based in Santo’s Fanafo area and Stevens was supported by French-speaking landowners and the Phoenix Foundation, an American company that wanted to see what was then New Hebrides become a libertarian tax haven.

Mr Dan was married to a woman from the Kole community on East Santo and was living in Kole at the time.

He says the rebels came to Kole and were attacking villagers who were Independence supporters.

“We were told by a chief to evacuate the village,” Mr Dan told VBTC.

Mr Dan recalls that the people of the Hoghabour community in East Santo were frightened of the rebels and wanted to let Walter Lini know about the situation.

He says the only means of communication at that time was through radio telecommunications and it was difficult to get pro-Independence information out via tele-radio because the rebels constantly monitored all channels.

“If they caught you giving information to Port Vila, you would be beaten up,” he said.

Mr Dan says the Hoghabour community tried to communicate with Port Vila through tele-radio but the rebels deliberately drowned out their messages by playing loud music.

Making things more difficult, Santo’s Independence supporters couldn’t use the national language, Bislama, to communicate, as the rebels could understand it.

They tried to communicate in the Epi Island dialect with the help of a teacher who was from Epi, but a Nagriamel supporter from Fanafo was also from Epi and could understand and block what the teacher was saying.

“The people from Hoghabour then contacted a Nurse from Torres Island in Torba Province so that he could talk to Walter Lini in the Torres dialect but the same thing happened – there were rebels who understood that language and so nothing was working,” Mr Dan said.

Sela Molisa, a pro-Independence leader from West Coast Santo at that time who worked closely with Walter Lini, provided a critical breakthrough.

“The people of Hoghabour decided to try to communicate with Sela Molisa in the West Coast Santo dialect which could not be understood by the rebels,” Mr Dan says.

“I was hiding in the bush with my wife at Kole at that time, and the Hoghabour community sent a driver named Gideon to come and collect me. He was the only driver who could get through the Nagriamel supporters’ road blocks between East Santo and Luganville Town.

Mr Dan says the rebels were everywhere and that he needed to find somewhere safe to set-up his tele-radio.

He travelled with Gideon to Hoghabour and took the radio up to a hill above the Hoghabour Junior Secondary School.

“With the men from Hoghabour, I climbed the hill with the tele-radio and threw the radio aerial to the top of a tree and took the device into a cave there,” Mr Dan said.

“Then I switched on the radio and started talking to Vila to get Sela Molisa on the line.

Mr Dan updated Sela Molisa on the dangerous situation in Santo; and the Nagriamel supporters, who couldn’t understand the dialect, missed the critical conversation.

Sela Molisa asked him to report back on the Nagriamel presence in Luganville and at Santo’s Pekoa Airport where the rebels had blockaded the airfield so no planes from Port Vila could land.

“I went to Luganville Town to see an old couple who were Nagriamel supporters,” he says.

“The wife was friends with my wife but because the old couple were Nagriamel supporters, the wife was allowed to sell at the Luganville market and she knew about the rebels’ presence in town and at the airport.”

Unaware that he would be reporting the details back to Port Vila, Mr Dan says the old couple provided him with valuable information on the situation in town and the airport.

He then returned to Hoghabour and radioed the information back to Sela Molisa in Port Vila.

Throughout the month of May untill early August of 1980, with Santo under rebel control, Mr Dan continued to pass on vital information to pro-Independence leaders in Port Vila.

Papua New Guinea Defence Force troops, called in by Walter Lini, arrived in Port Vila in mid-June, and although Independence was declared in July, it was never celebrated in Santo because of the rebellion.

“I spoke with Sela Molisa at midnight every night by tele-radio during that time,” Mr Dan said.

Post-Independence, and contacting the old couple in Luganville again for information, Mr Dan was able to report that the rebels had retreated to their Nagriamel base in Fanafo and that Luganville Town and the airport were clear.

He travelled again to Hoghabour to report to Sela Molisa and Walter Lini that the Santo airport was clear and that PNG troops could fly in and land on the airfield.

It was a pivotal moment in Vanuatu’s fight for Independence, with Mr Dan’s communications with Sela Molisa in the West Coast Santo dialect clearing the way for PNG Troops to land at Santo’s airport to put an end to the rebellion.

In the second week of August 1980, the PNG troops arrived in Santo and were able to secure the airfield and other strategic facilities in Luganville Town.

Mr Dan says days later, Jimmy Steven’s son was killed by Papua New Guinea Defence Force snipers after he rammed a military check point in Luganville where the PNG Kumul Force was stationed. The force was maintaining a State of Emergency 24/7, guarding strategic public facilities such as water, power and communications infrastructure, fuel depots and the hospital and airport.

Two days after the death of Jimmy Steven’s son, the PNG troops invaded Fanafo where Jimmy Stevens and his rebel group waved the white flag of surrender.

Virgin schedule not yet release